I first saw The Station Agent as soon as the first bootleg screener DVDs hit the media pirate stalls of Manila, back in those slowband days of 2003 when downloading a film could take the better part of a week. Aside from the novelty of being a well-received indie “art” film with a dwarf actor in the lead, the most the film seemed to have had going for it was riding the wave of Patricia Clarkson‘s burgeoning cred as a character actress to be reckoned with.

Looking back now, who would have predicted that Michelle Williams would eventually snap up a series of Oscar noms, while Peter Dinklage would fall into THE role he was meant to play in Game of Thrones‘ Tryion Lannister. Strange to remember a time when, by accidents of birth or early career choices, either had to strenuously prove themselves just to be taken seriously as actors. Here, before the awards and hard-won respect, when they were younger and rawer, it’s all the more awe-inspiring to glimpse the fire in their eyes that’ll herald the greatness to come.

The film really stood out like a precious fluke, a lucky confluence of casting and charm. Before starting to write this blog entry, I meant to just skim through the film to spot my favorite scenes and frames, and before I knew it, I had been wholly sucked into watching the entire first half. And for this whole first half McCarthy builds the characters and setting like a master craftsman, with grace notes both unrushed and unforced.

Gratefully, McCarthy never falls into the rookie indie director’s trap of piling on the showy look-at-me flourishes.  Instead, he focuses on picturesque-but-profound little details such as the cracked paint on an old depot, an impromptu meal of spicy Cuban food, and even how Williams’ town librarian (un)subtly adjusts her make-up. The aforementioned librarian would have remained a relatively sketchy, thankless role had it been played by any other ingénue, but the former Jen Lindley is incapable of not glowing. You may not be able to ignore Dinklage’s physical stature, and the story is dependent on it, but this was one of the few, if not the first, times an actor of his size was privileged with a role of this depth and prominence. Charismatic, enigmatic, and sympathetic, Dinklage dominates the film, all 4 feet of him.

Bobby Cannavale plays a guy so relentlessly good-natured, you can’t help but give into his friendly joie de vivre. The way Cannavale embodies this Latin lunk, the character is just so gosh-darned likeable, McCarthy re-uses him practically wholesale in his 2011 film Win-Win. Cannavale easily gives off this warm, natural nice-guy vibe that seems to say… as long as you’ve got me as a friend, things are all gonna be ok. With a less charming actor, this persona could come off as grating, like a live action Johnny Bravo, but he nails the artless physicality of it. He may have the look and build of a leading man, but in this story he’s the jester, the clown, while Dinklage gets to smolder as the brooding, mysterious romantic stud. It was a risky role reversal that paid off and really makes the film. In fact, when George R. R. Martin wraps up his saga, maybe Dinklage and Cannavale should move on to showing us the further misadventures of Finbar and Joe?

Patricia Clarkson’s MILFy goodness is in full force here. Not to take anything from her as an actress (and she’s one of my favorites), but my theory is that the redheads easily nab these complex-fragile women parts partly because of how the paleness of their complexions comes off as so delicately translucent on film. This quality won’t make a bad redhead actress come off as a great one, but it’s become kind of like cinematic shorthand that redhead = vulnerable but passionate. But Clarkson could have skin like sandpaper and still do justice to the role of a grieving mother and artist through sheer skill alone.

Regrettably, her character is saddled with the clunkiest arc, pushing the plot perilously close to TV movie-of-the-week territory. If you’ve seen enough melodramas, from Douglas Sirk to Lifetime, telenovelas and even Maalala Mo Kaya, and you see a female character of a certain age, with an artistic/volatile temperament (a redhead no less), who has suffered a great loss, well… how else can that storyline play itself out? McCarthy doesn’t exactly break the trope here. Good thing all the other elements are just quirkily poignant enough to elevate the emotional cliches and get over this hystrionic hump by the end. 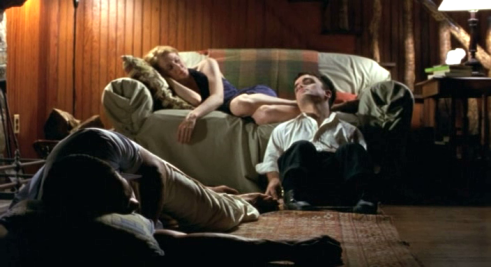 So it’s genuinely exciting to trace McCarthy’s growth as a dramatist when considering the progression of his next three films. There’s clear growth from Station Agent to Visitor, to his writing assist on Pixar’s Up (a master class in dramedy if there ever was), and finally to Win-Win. With such a pleasant, likeable body of work, he may not be as raved about by cineastes who get off mostly on “edgier” fare, and yet by playing more in the light than in the darkness, McCarthy exposes more of the human condition, in more detail and with more dimension.